Santiago Guallar PhD student (2014-2018) I aim at reconstructing the evolution of moult strategies and unravelling the factors that influence molt pattern formation and variation in passerines. The approach involves unsupervised methods to reveal patterns and phylogenetic analyses to reconstruct trait evolution throughout the tree of this order.

Jorge Doña PhD student (2014-2018). I am interested on understanding how biodiversity arise and is maintained in the host-symbiont system of birds and feather mites. I am using taxonomy, molecular ecology, lab experiments, comparative method, network analyses and individual-based models.

Anna Krystalli. Research Software Developer. My background is in macroecology, in particular plankton ecology, although I’ve recently been working on birds traits. I enjoy extracting pattern from large ecological datasets, as well as the process of building statistical tools and software. In JovaniLab I am working on phenotypic integration studying the network of bird traits’ evolutionary correlations. 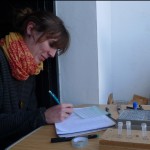 Marina Moreno, Master student (2013-2014). Her goal was to understand why some species of feather mites are highly diverse in their COI mitocondrial DNA while others show a low diversity of haplotypes. She explored the hypothesis that mite species demographics (linked to bottlenecks) are behind the differences we found on the genetic diversity between mite species.

Javier Díaz Real, Undergraduate (2011) and post-graduate and master student (2012-2013). Javier was very involved in our feather mite studies in the field, and in the molecular lab. He is now doing the PhD Thesis in Universidade de Vigo.